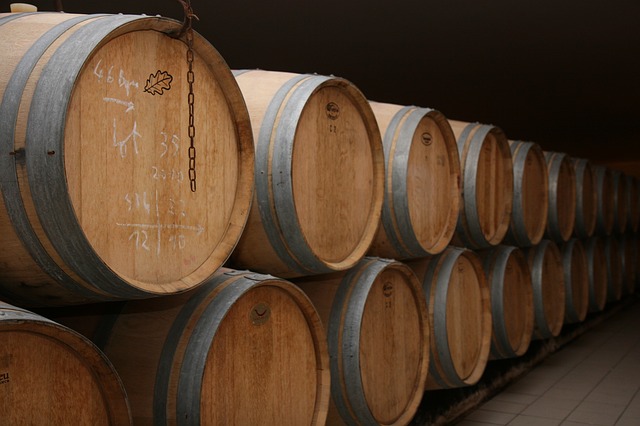 The beauty of winemaking is that it incorporates so many natural elements into the final product. Every fragrance and subtle tone of flavor is the result of a carefully considered combination of ingredients, and environmental factors. Nowhere is this relationship more pronounced than the art of fermenting and aging wine in barrels. There are many reasons why you'd want to use wood, and certain species of it in fact, in order to influence the flavor of your wine. There is also a rich history behind this ancient practice.

How It All Started

Back in the Bronze Age, long before barrels were a thing, people used amphoras - large, ceramic containers which were a staple of the marine trade at the time. While they got the job done, the vessels themselves did not impart much flavor to the beverages they carried. Nobody knows exactly when barrels became popular. We do know that around 100BC, Greek historian Herodotus wrote about the ancient Mesopotamians, and how they fashioned barrels from palm wood to ship along the Euphrates River. The practice became increasingly popular as the years progressed.

The Rising Dominance of Oak Barrels

Palm wood would prove to be a viable, cost effective choice, but its popularity did not last long as the wood itself proved difficult to manipulate into the curved shapes required by a barrel. Merchants and craftsmen began to experiment until a widespread consensus was reached. At the height of the Roman Empire, oak would became the wood of choice throughout the civilized world. And while the practice of winemaking has evolved, it's pretty telling that over two millennia later, oak remains a top choice for winemakers.

How did so many generations of artisans reach such a definitive conclusion? There are a number of factors that come into play. For starters, oak is a very strong and durable hardwood that can take a lot of abuse. With proper care you can use an oak barrel indefinitely. Another aspect of oak which makes it ideal for fermentation is the fact that it's a porous wood, allowing the wine to evaporate. During the aging process a typical barrel will lose about 10% of its overall volume through evaporation. This process allows the wine to concentrate and intensify its flavor and aroma.

In addition to its ideal mechanical properties, oak is famous for imparting a bouquet of flavors to wine. Hints of clove, cinnamon, nutmeg and vanilla are among the spectrum of characteristics that will impart a subtle, yet notable taste. Oak adds a great deal of complexity to a wine's aftertaste as well. Hints of caramel, coconut, toffee and butter are typical as they sit on the palate. Oak also provides a natural source of tannins, which are a vital part of the winemaking process, aiding fermentation and contributing yet another layer to the complexity of taste.

The newer a barrel is, the more flavor it will add to your wine. A barrel that has seen continued use throughout the years will give off a significantly smaller amount of its character, not unlike an overused tea bag. This can be a good or bad thing, depending on the sort of flavor you are looking to produce. For most reds and certain whites, newer barrels are desirable. Some winemakers even use "200% new oak", where the wine is put into new oak barrels twice during the aging process.

These varietals are famously receptive to the flavors that oak has to offer. For most others you will welcome the subtlety of an aged barrel or even a plastic or parrafin wax lined barrel.

For those seeking to infuse yet more color, flavor and arome to their wine, the inside of a barrel is often "toasted" to varying degrees. The more singed the barrel, the more flavor and character it will release. This is also a common practice for producing whiskeys and bourbons, whose golden color is attributed to the burnt oak.

Barrels can be filled with water for a while, then flushed out so the wood grain swells, ensuring a tighter overall fit of the barrel and a smaller degree of evaporation.

The most popular choices for barrel aging is American, French, or Romanian Oak. Chestnut is also used by many winemakers. Each one brings a unique blend of qualities to the table.

American oak barrels are cheaper, have a wider grain and lower wood tannins as compared to French oak. Because of the wide grain, american oak leeches more of its flavor adding a sweeter and spicier finish to the wine, with especially strong notes of vanilla and allspice.

French oak barrels, add a more subtler flavor given that the the wood grain is a lot tighter. The higher tannin content of the wood itself has also been a factor in its widespread popularity. For many purists, french oak is a "Gold Standard", the only way to go if you take your winemaking seriously. In our experience, the choice of grape plays a crucial role in the choice of wood.

Romanian oak barrels provide certain characteristics such as compact fibres, good wood porosity, an average content of extractable polyphenols and soft flavour compounds. It is very common to toast this particular wood as it unlocks a bit more of its natural flavor.

Chestnut barrels have also been historically popular, due to widespread availability and low cost. Various studies found that chestnut oak has a higher concentration of low molecular weight polyphenols than oak, and those beverages that are aged in chestnut develop complex flavors, a light tannin content and good fruit preservation.

One caveat to be aware of with chestnut is due to the fact that it is more porous than oak. This causes the wine to oxidize more rapidly, which makes chestnut ideal for quick fermentation as opposed to long-term storage or aging. Your mileage may vary so make sure you have at least intermediate knowledge of winemaking before opting for chestnut.

For some newcomers to winemaking, the price and size of an oak barrel may be too ambitious of a proposition. Thankfully there are some cost-effective solutions. Polybarrels made of food-grade plastic come in all different sizes and will cost you less than half than some oak varieties. They may not impart the same flavor, but they are durable, resistant to rot and provide a consistent rate of fermentation - something that can be desirable for someone just learning to make their wine.

Some people crave the best of both worlds - maybe they don't mind using a polybarrel as long as it's cheap and has an authentic look to it. For these occasions a roto barrel can be an attractive choice. It is also built of food grade plastic, providing good thermal insulation and steady fermentation. The inside is lined with parrafin wax, a common liner for many signature wines. Riesling in particular is famous for the surprising dimension added to its wines by parrafin wax.

As you can see from this brief article, just one aspect of winemaking provides a source of endless education. If you'd like to learn a lot more first-hand and are near the Massapequa area, we recommend our Winemaking 101 course for beginners. While we enjoy writing educational articles, we also recognize that reading only scratches the surface of an industry that could not be more hands on. Your guide on this intensive crash course is Peter Pagano, a seasoned veteran who will show you the ropes and make you a competent winemaker in a matter of hours. You can read more about this course, along with the personal benefits of winemaking in our previous article.